Twitter (TWTR) reported a significant miss on Thursday for Q3 2019 that sent shares tumbling 20% in one day. While the user metrics were strong with accelerating monetizable Daily Active users, the company missed on revenue that flowed through to a big miss on the bottom line. The company’s management lowered guidance as well for the rest of the year, after some product issues that weighed on advertising revenue.

Twitter had been having a solid 2019, posting numbers in the first half of the year that encouraged investors to buy the stock all the way up to $45 per share in early September. In my last article on the company, I wrote about how the company was performing well, but I wanted to see greater revenue growth combined with improving margins before starting a position. Q2 2019 saw Twitter post a 9% operating margin, down from 11% in Q2 2018 on revenue growth of 18%. Now in Q3 the company posted an operating margin of 5%, down from 12% in Q3 2018 on revenue growth of just 9% year over year.

Simply put, with revenue growth this small, it will take a long time before the company gets anywhere close to margins like Facebook (FB), which reports Q3 2019 numbers next week. That, combined with Facebook’s consistent 25% or greater revenue growth and lower valuation, caused me to state in my previous article on Twitter that Facebook was a better stock to own for growth investors, an opinion I continue to hold today.

Twitter’s revenue this quarter was impacted by some bugs that affected the company’s ability to target ads and share data, as well as greater than expected ad seasonality in July and August. September was strong, however. Management seemed to remain positive on the Q3 conference call but stated that these problems with advertising products would continue to impact revenue going into Q4 2019. Specifically, the problems were related to Twitter continuing to use data from users that had declined to give Twitter permission. The company lowered Q4 guidance, as a result, to revenue between $940M and $1.01B (compared to $1.06B consensus), with operating margin expected to come in between $130M and $170M. 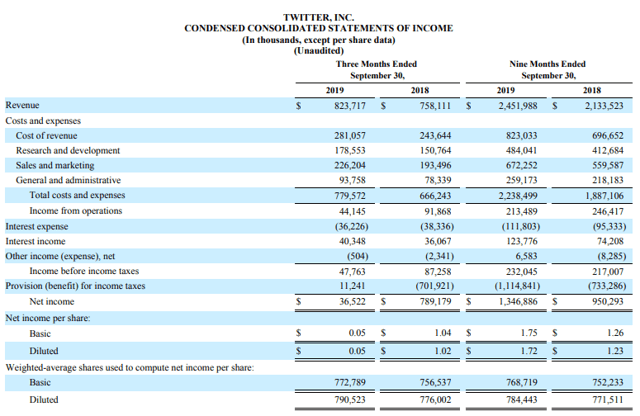 While I’m bullish on Twitter’s business model, the company evidently still has some problems to work through. The low margins relative to peers leave little room for error, as seen this quarter. The stock remains risky going into Q4, but it also leaves room for a surprise to the upside. Q4 is seasonally the strongest quarter for Twitter and online advertising companies.

Twitter is now cheaper on a price to forward sales basis after the 20% drop compared to Facebook and Snap (SNAP), but also continues to see the lowest revenue growth. The company did, however, post higher user growth than Snap in Q3 2019.

Twitter remains a stock I’m watching closely going into 2020. This is possibly a better time to buy it than a few months ago, but it still isn’t turning the user growth into revenue growth that I need to see to justify buying this stock. In time, I’m expecting revenue growth to increase solid double-digit percentages if it can keep posting user growth like this, but the company isn’t there yet.

With companies like Facebook and even Pinterest (PINS) growing revenue much faster, I continue to prefer those stocks over Twitter. Ultimately, I remain neutral on Twitter and will be watching revenue growth rates, operating margins, and user growth through Q4 and into 2020.