The London-based Asos (OTCMKTS: ASOMY) (LON: ASC) is one of the eCommerce names we have been taking a closer look at for some time. The company has over 22 million active customers, with 70% of the €2.7 billion of revenue concentrated in the EU and UK, while the US made up 13% of the revenue. The company has differentiated itself by targeting the young adult segment, allowing the company to leverage a targeted go-to-market approach. Top-line growth and operating profitability have been steady over the last five years, though the business saw some operational challenges in 2019. While we believe that the long-term prospect as a +20% grower remains intact, we will maintain our neutral rating on the stock, for now, considering the potential near-term slowdown in operating and investing activities due to the COVID-19 situation.

In our view, Asos’ competitive positioning as an eCommerce business targeting young adults, or what the company claims to be a “20 something” niche, is an interesting long-term proposition. In addition to the sizable TAM behind the business, young adults, in general, have a greater tendency to be the early adopters of new trends, including those in fashion and online media. Consequently, this will allow the company to adopt a more targeted and differentiated marketing approach.

While many mainstream eCommerce brands have been leveraging performance marketing through Google (GOOGL) or Facebook (FB), young adults have been shifting away to Instagram over the last few years. Asos has been taking advantage of this opportunity by making Instagram as its major marketing channel. Asos’ 10.4 million Instagram followers as of today, already represent almost 50% of its 22 million active customer base.

Asos’ total number of followers is also over 10x that of Zalando (OTCMKTS: ZLNDY), whose focus is more on the mainstream fashion. 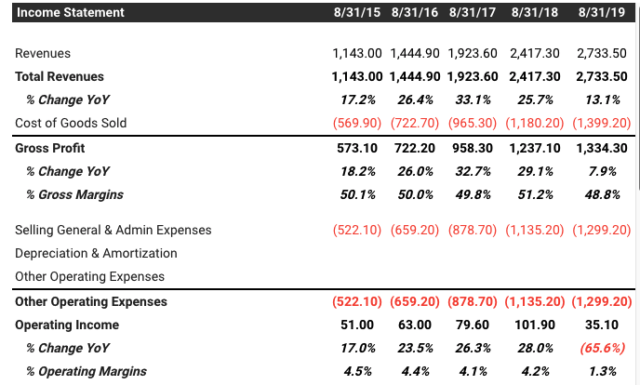 In our view, Asos’ targeted approach allows the company to deliver a more predictable and reliable ROI from a less-competitive alternative marketing channel, such as Instagram. Given Zalando’s mainstream focus and more diversified business model, its gross margin has also been trailing Asos by 700 – 800 bps on average, except for 2019. Asos’ targeted marketing, moreover, has played a role in keeping its operating margin steady at +4%. Zalando’s operating margin, on the other hand, is more volatile and has been between 2.2% – 5.4% in the last five years.

Considering its international ambition, Asos will remain a cash-burning company for some time. Net changes in cash have been in red, even in 2019, where the amount was already offset by the €75 million debt withdrawal to strengthen its balance sheet. In the last two years, it spent a combined sum of ~€200 million in CAPEX while only generating €184 million of OCF (Operating Cash Flow).

These investments in warehouse assets and fulfillment centers are necessary, given that they will enable the company to provide a better delivery service while achieving better unit economics through better capacity utilization. Due to these investments, for instance, the US business, which also sees intense competitions, can now provide a next-day-delivery service. In Q1, however, the company announced the suspension of its CAPEX investment further, given the COVID-19 situation.

Asos’ long-term prospect remains attractive due to its focus on the young adult segment and its strong brand reputation in the UK, where Zalando’s footprint is relatively weak. Asos is a third of Zalando in terms of revenue, though both companies have a similar level of operating profitability, with Asos leading in terms of gross margin. At a 0.8x P/S and a +20% growth prospect, we think that the price should have been a little bit more attractive given the management’s recent weak execution, negative cash flow situation, and also the potential downside ahead due to COVID-19. Zalando, the mainstream fashion market leader in Europe, trades at 2.2x with the same level of growth, stronger cash flows, and stronger execution, despite being three times as large as Asos. We will maintain our neutral rating on the stock, with a potential upgrade once the P/S drops to ~0.5x to create a more attractive entry point.

Disclosure: I/we have no positions in any stocks mentioned, and no plans to initiate any positions within the next 72 hours. I wrote this article myself, and it expresses my own opinions. I am not receiving compensation for it (other than from Seeking Alpha). I have no business relationship with any company whose stock is mentioned in this article.

Editor’s Note: This article discusses one or more securities that do not trade on a major U.S. exchange. Please be aware of the risks associated with these stocks.